What is Symbol? | Symbol Blockchain 101

What is Symbol? Symbol was developed as the next iteration of NEM’s blockchain platform that was built to better meet the needs of businesses, as the use of blockchain technology has evolved. Symbol's goal is to assist organizations looking to use blockchain technology to develop new business models and innovative solutions.

Symbol does this by making it easy for developers and enterprises to harness both private and public chains utilizing a hybrid approach. Watch the short intro on Symbol below:

Symbol is the second iteration of the NEM platform. The first iteration, called NEM NIS1 was, launched in 2015 and focused on providing users with efficiency and scalability combined with developers' ease of use. Developed by NEM Group, Symbol is NEM 2.0 built in C++ for a faster, more scalable and enhanced interoperability blockchain platform.

NEM, or the New Economy Movement, was developed to build a smarter and more technologically-advanced blockchain. In 2014, inspired by NXT, NEM was coded in Java from scratch as a plug 'n play blockchain platform, and officially launched the mainet on March 31, 2015.

NEM's 100% orginal source code was far ahead of most of its peers, in which many were copies of popular blockchains at that time with minor tweaks. NEM has been dubbed 'The Smart Asset Blackchain' with its tiered architecture and easy customizable industry solutions.

One of NEM’s crowning achievments was its introduction of proof-of-importance (POI) and delegated harvesting, a unique and innnovative approach over its competitors. This along with Namespaces, Mosaics, and its hybrid approach by offering both public and private chains set it apart from the get go.

Symbol takes these concepts and builds on them even more, offering POS+ an enhanced Proof-of-Stake for consensus by also including account activity as part of the reward to better grow the ecosystem. This circumvents the traditional proof-of-stake consensus which allow the wealthy to get wealthier by rewarding and encouraging participation in the network. Traditional POS promotes saving instead of spending which POS+ remedies.

As XEM is the native currency of the NEM NIS1 blockchain, XYM will be the native token on the Symbol platform. To take part in the Symbol launch, all you have to do is hold XEM at the time of the snapshot. Migration from XEM to XYM will occur on March 15, 2021 at block 3,105,500. This will give 1 XEM = 1 XYM + 1 XEM after snapshot.

You will need to opt-in to receive your XYM tokens. This requires downloading the official NEM wallet and opting in through the wallet services. If you miss the date before opting in, no owrries as you can opt-in up to 6 years after Symbol's launch. For a deep dive into Symbol, please read the whitepaper.

Symbol's signature feature is its plug-n-play framework which reduces development time and secure against human error to build speedy applications. This combined with a powerful API interface allows developers with any programming language to dive right in and begin on-boarding projects.

Symbol stands out by offering a hybrid approach to blockchain with its public and private chains. Many companies need a permissioned chain to protect its ecosystem or just to begin testing with real world data.

Combine aggregate transactions with account restrictions and the Symbol blockchain offers unparalleled enterprise ready functionality for a plethora of business use cases. XYM or other assets such as mosaics, can be restricted to be sent or received by certain accounts through its account management features. 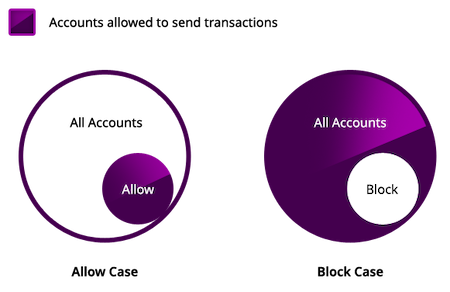 Another core feature is its multi-sig at up to 3 levels. When an account is converted to a multisig account, the consignatories become account managers. Any number of M of N with up to 25 cosigns can be achieved. For example if you have 10 account managers, but only need 3 signatures, then only 3 of 10 sign-offs will be needed to release a trnasaction. But this can get more complicated very quick, consider the supply chain scenario below: 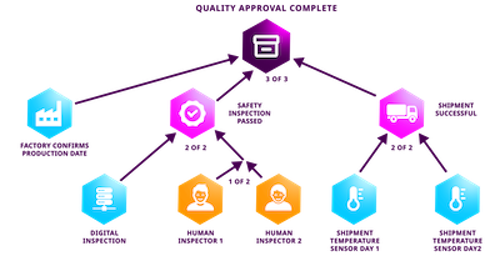 One of Symbol's signature features are its mosaics. These are interchangeable fixed assets that can represent anything on the blockchain, such as signatures, voting, reward points, stocks, or any other commodity or token. Mosaics bring unlimited use-case scenarios to the Symbol platform and allow for the creation of mosaics with just a few clicks and inputs from the user through the desktop wallet. Again no programming necessary!

Above are just a handful of the many practical features for everyday businesses and individuals on the Symbol platform.

Symbol rests on a 4-tiered architecture of nodes and supernodes that secure and provide a stable platform for the whole network. This consists of the client, REST gateway, MongoDB, and API or peer nodes. 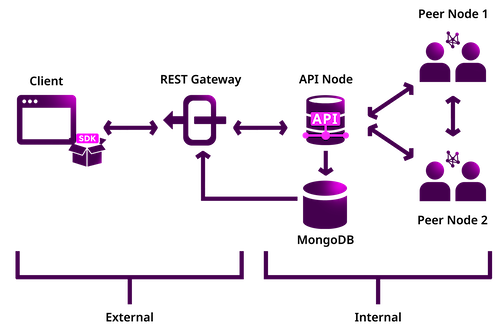 The peer nodes are the spine of the whole blockchain providing guaranteed uptime despite isolated failures of nodes. These nodes are responsible for verifying transactions and blocks, processing the consensus algo, and pushing any network-wide changes. Click here for more info on symbol nodes or if you want to help support the network

Symbol will have the same amount of coins as in NEM with a max supply of 8,999,999,999 XYM. At launch, there will be approximately 7,300,000,000 XYM released, with the rest for harvesting, rewards, and inflation. The remaining 1.7 billion XYM will be released over the next 100 years, mapping bitcoin inflation rates, every quarter instead of every 4 years. This gives a more gradual and smooth decline of supply instrad of a max drop every 4 years.

Included in the economy of XYM are harvesting, transaction fees, and node reward programs. You can read more on the Harvesting section below.

Diverging from the energy-intensive proof-of-work (POW) and the more popular proof-of-stake (POS), Symbol again goes to the next level and offers proof-of-stake plus (POS+) for network consensus and validation. POS+ rewards network participants and encourage account activity. Symbol achieves this by using a stake score, transaction score, and node score to caculate overall POS+ rewards.

Nodes & accounts can take part in block creation which is called Harvesting on the Symbol platform. The account that 'harvests' the block receives the rewarded transaction fees attached to that block. An amount of 10,000 XYM is required to activate harvesting on your account.

In order to harvest you will either need to run a node or delegate harvest on a remote node. Users can participate on block creation without running a local node by delegated harvesting, a speical feature of the Symbol network.

The Symbol platform has a sink address set at 5% of harvesting rewards to further fund node activities and support the network. Each node can set a share fee (up to 25%) so that anyone remote harvesting on their account can take part in the node's rewards as a beneficiary account. These further incentivizes others to delegate harvest on their node. 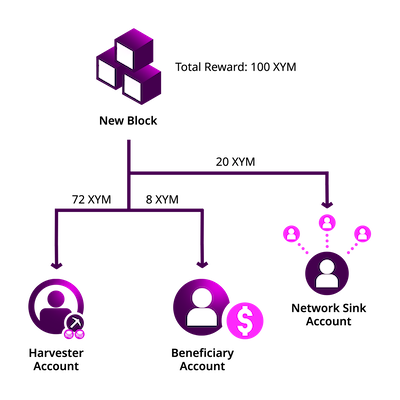 On top of harvesting, Symbol also rewards stkeholders that run supernodes to help secure and harden the network. These nodes are high performance that meet certain criteria such as bandwidth, responsiveness, computing power, and XYM balance to claim rewards. Symbol offers a 3-tiered supernode program of 1 million, 2 million, and 3 million XYM balance levels.

This program was extremely successsful on the NEM blockchain and will continue on the Symbol platform to strengthen the network. A set amount will be paid out each day and divided up among the total supernodes for that level. View the graphic below for projected supernode earnings based on the XYM balance. For example, if you hold 2 million XYM, you can be expected to earn ~135,000 XYM in year 1 for running a supernode.

Symbol, the next generation of an enterprise blockchain, provides the best of both public and private networks. Whether you’re looking to streamline transactions, tokenize assets, enable transparent trading, or protect data and identity, the Symbol platform can remove business friction and complexities. Symbol's goal is to connect business, blockchain, and people through a secure, trusted platform to enhance the systems and processes that underpin transactions and exchange.

The genesis block launched on March 15th of 2021. Symbol is owned by the NEM Group; the source code is open and free for all to use.